Your cart is empty.

City with 100 fountains, Aix-en-Provence is soaked  with it to its name, as shown by its Latin etymology (Aquae Sextiae :  Sextius water). The author Tite-Live iwrote that " the proconsul C. Sextius, established the colony Aquae Sextiae, so called in reason at the same time by the abundance of waters coming from hot and cold sources and from his own name". From the Antique period, the city is so is considered as its thermal baths and its waters quacks. While Aquae Sextiae is for its peak at the beginning of our era, Romain forwards on the spot waters directly stemming from sources springing on the foothills of the mountain Saint-Victoire.To do it, they built four aqueducts, vestiges of which are still visible today. Together, they fed the thermal baths of the city, while insuring the daily consumption of Aquenses and by cleaning up the network of sewers, security of public health. 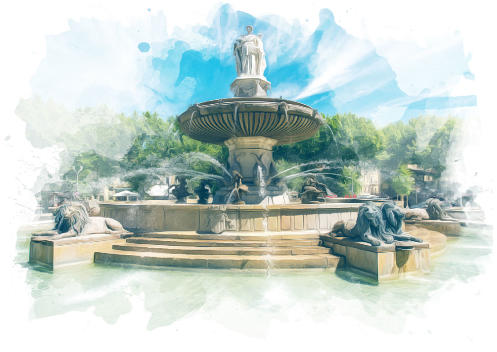 The water of Aix, a rare purity

The water tells a two-thousand-year-old story at the foot of the Mountain Sainte-Victoire, that of a blue gold from which the men work for a long time to protect the rare purity.

Still today, the rythm of Aix-en-Provence settles comfortably on the flow of its waters. From the mastic "Rotonde" opening the Cours Mirabeau to the uncountable resurgences, or so many harbors of freshness at the heart of the old town, from the water wall (the biggest in Europe) to the place of the four Dauphins, where throne the eponym fountain, the baroque masterpiece of the XVIIth century, the water of Provence abounds in all its purity there. This purity is the source of inspiration of the Atelier Sainte-Victoire.

The virtues of pure water

The Atelier Sainte Victoire has created a range of natural, elegant and authentic care which expresses the power of the Mediterranean’s natural assets thanks to the exceptional purity and freshness of the Provence water.
Taken at the feet of the Mountain Sainte Victoire, our water is filtered by an exclusive process, which exalts its purity and eliminates all traces of harmful chemicals and biological organisms that could irritate sensitive skins.
This ultra-pure water makes it possible to express the natural properties and virtues of the Mediterranean’s vegetation assets and to minimize the use of preservatives.
This combination of ultra pure water from Provence and a rigorous feature selection, allows our products to contain a high rate( more than 98%) of natural ingredients, and to be certified ‘Organic’ by the most demanding independent organizations (Ecocert, Cosmebio).
Our water is certified by the European Pharmacopoeia. 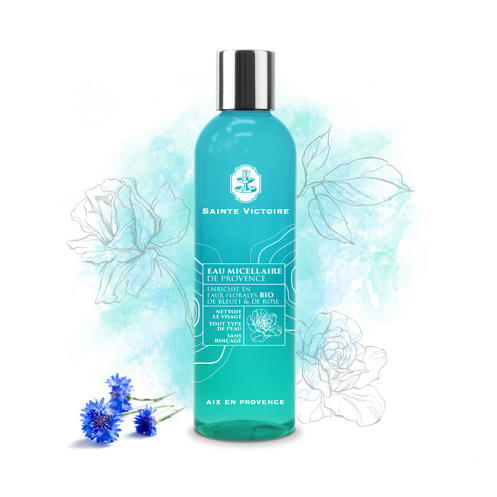 Organic cosmetics
Organic micellar cleansing water
Made with pure water fom Provence, rose floral water, and cornflower water
Clean the face, without rinsing, on any skin type, even the most sensitive. To clean itself the face...
19,90 € Add to cart